For the last 35 years, Carolyne Barry has achieved recognition in front and behind the camera, as an Actress, Teacher, Casting Director, Director, and Producer.

"Most every new actor I talk to is seeking direction, what to do and where to go to become a successful actor. The first few years are crucial for building the actor’s craft and career. This is why I wrote HIT THE GROUND RUNNING – to supply the necessary information, tips and insights to create the foundation and to help start a career in acting." - Carolyne Barry 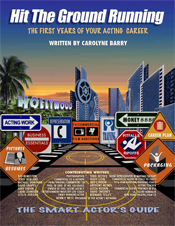 Purchase your copy for $22.95 (plus shipping and handling)

"Carolyne Barry is a respected authority and a brilliant communicator. She provides the effective information to help actors start their careers."
- Rob Light, Managing Director of Creative Artists Agency, LLC

“Many people dream of having some sort of acting career but don’t know where to start. To all of the dreamers out there I have finally found the answers to all our questions on how to start a successful career in acting. The answers lie in the book, Hit The Ground Running The First Years of Your Acting Career, written by Carolyne Barry.”
- Adriana Davalos, Splash Magazine